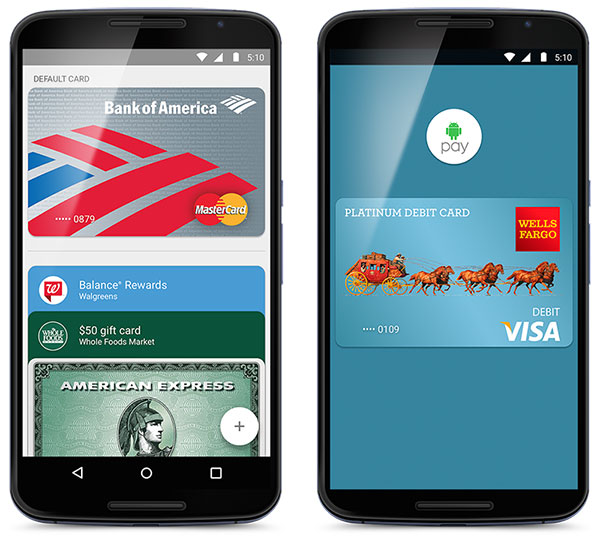 Google on Thursday began rolling out Android Pay, its answer to Apple Pay. Android Pay allows shoppers to make purchases at more than a million retail locations across the United States. It also stores gift cards and loyalty cards, and provides special offers directly to a user’s mobile device.

Android Pay is compatible with all NFC-enabled Android devices — that is, those running KitKat 4.4 and later — and it works across all carriers. It supports the four major payment networks: American Express, Discover, MasterCard and Visa. It also accommodates cards issued by many popular U.S. banks and credit unions, such as Bank of America, Navy Federal Credit Union, PNC, Regions Bank, USAA and U.S. Bank.

Wells Fargo, Capital One and Citi will join the program in the coming months, Google said — but Chase is conspicuous in its absence.

Google has introduced a new version of the app, Google Wallet (New), which will live on as a cash-swap service that works much like PayPal or Square Cash.

Android Pay serves as an extension of a credit or debit card, with an additional layer of security. It’s supported by industry-standard tokenization, so actual credit and debit card information isn’t sent with a payment; a virtual account number is used instead.

To use Android Pay, users must load credit, debit and gift card data onto their compatible Android device. They can then leave their cards at home and check out with just the handset — at participating merchants, of course.

Android Pay may have resolved the issues that curtailed the adoption of Google Wallet.

“The original Google Wallet suffered from political opposition from the carriers, which Google has now overcome, and a lack of user awareness, which Apple has helped with tremendously,” noted Greg Sterling, vice president of strategy and insights at the Local Search Association.

“Android Pay basically emulates or duplicates the user experience of Apple Pay,” observed Sterling. “Apple and its banking and retail partners have done a good job of educating users about the benefits and convenience of mobile payments. Accordingly, Android Pay will benefit from all that and should catch on relatively quickly with early adopters as a result.”

Not If but When

The chief holdup for mobile payments is that not every retailer that takes credit and debit cards has signed up to accept device payments. However, many major retailers are now on board, including Bloomingdales, Macy’s, Toys “R” Us, Sports Authority, Whole Foods, Walgreens, Rite Aid and Subway, with more on the way.

“Mobile payments — especially for offline services and products — will remain a minority use case for the near term but over time will gain more momentum, especially among younger users. The question is not if but when,” Sterling predicted.

“You really do need the merchants on board as much as the consumer,” said Roger Entner, principal analyst at Recon Analytics.

It is easy to see how consumers benefit — convenience and security — but mobile payments may be good for retailers, too.

For example, “it provides a faster and more expedient checkout experience,” Entner told the E-Commerce Times. “One example is quick-serve restaurants where people can pay right at the table. It is less hassle for the customer and ideally can speed things up.”