Gadget Ogling: A Deluxe Dock, a Crafty Computer, and a T-rific Tablet Stand 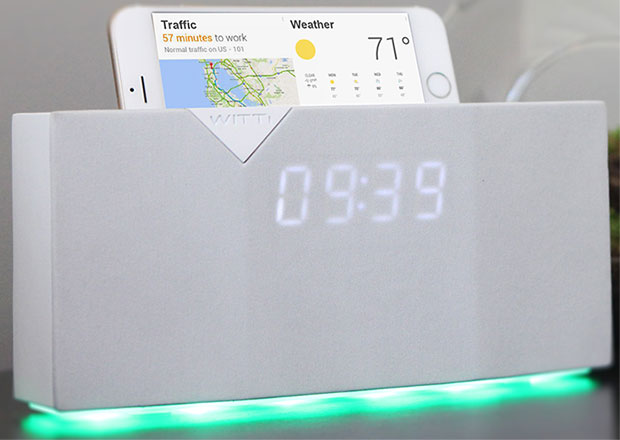 Welcome to another edition of Gadget Dreams and Nightmares, the column that files dispatches from the road on the week’s best, brightest and most compelling gadget announcements.

On the highway this week are a smartphone alarm clock dock, a new form of personal computer, and an adjustable tablet stand.

As always, these are not reviews, and the ratings relate only to how much I’d like to try each out, preferably as I laze in the back seat of a car while someone else takes the wheel during a lengthy road trip.
Sounding the Alarm

Beddi is an alarm clock smartphone dock that has a few tricks to elevate it above others of its ilk. The system, from Witti, works with both iOS and Android devices, which you place on top and recharge with your own cable.

Two things are really interesting: the price and the programmable buttons. In the case of the latter, that means using Bluetooth to pair your smartphone with Beddi’s companion app, and setting up the buttons, which include controls for some popular services, as you see fit.

You can play streaming music (and use it as your alarm sound too), control the temperature with your Nest system, make a Skype call with the speakerphone, turn on or off a Philips Hue light, or even order a car with Uber.

Beddi also can control Siri, and it can use its Google Maps integration to offer a weather report and traffic information to help you decide on an outfit for the day and plan your morning commute.

The dock offers dual speakers that can deliver ambient white noise to drown out noisy traffic. It has music playback functionality, along with FM radio, as seems to be the law for every smartphone alarm clock dock in history. Beddi also can gradually brighten your bedroom in the morning to make waking a little more pleasant.

Now, about that price. Witti is selling Beddi for US$100, or as little as $75 through its crowdfunding campaign. That’s more than fair value for what Beddi offers, considering many other alarm clock docks sell for around the same price but have far fewer features. There’s a lot going on here, and Beddi packs in just about everything one could want from a device like this.

I’m also an admirer of the WeMo connectivity. I’m a big tea drinker, so the option to adjust the kettle-boiling time each morning, depending on when my alarm’s set to wake me up, is also a big plus. But given how enjoyable Beddi seems, I’m not totally sure I could drag myself out of bed so easily to brew up a pot.

Solu is a small general-purpose computer in a partially wood-based box. Users can operate it as an independent mobile device through its own screen or hook it up to larger display for desktop use.

The user interface looks vastly different from Windows or OS X. It looks more like you’re navigating a neural network, lending credence to the suggestion that this is a computer designed for more natural human interaction.

It’s taking a different stance on a computer software payment model: For a fixed monthly fee, you have access to as much cloud storage as you need, and you can use as many apps as you like. While Solu is working with developers to create dedicated apps for the platform, Android apps also work.

It’s a compelling-looking machine, both in form and function. The physical case is resolutely handsome, and one I’m sure would draw many admiring eyes in public. Using Solu looks intriguing as well, but I admit I’m probably too entrenched in old ways of thinking — the menu- and folder-based Windows system — to ever truly take the leap.

Rating: 3 out of 5 Canny Computers
Taking a Stand

Here’s a tablet stand that tackles a couple of issues: optimal viewing at a desk, and using it while lying down. Tstand flips between multiple viewing angles that should help avoid unnecessary strain in both cases.

It might solve the issue of holding up a tablet with tired arms while watching a movie in bed only to drop it on your face when Mr. Sandman visits, but if you fall asleep while using it, there’s always the chance you’ll roll over and send your expensive tablet tumbling to the floor.

While it weighs only just over one pound, it doesn’t seem especially portable either, since it looks somewhat bulky. Still, I like it. The design’s clever, and I would absolutely consider getting one. I just don’t trust myself not to nod off during nighttime Netflix or Twitch viewing.