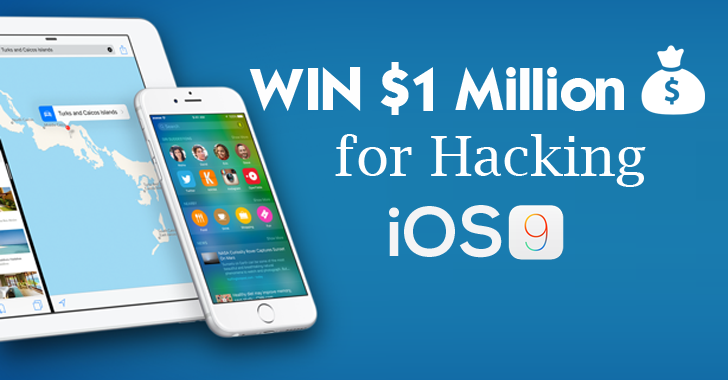 Zerodium runs a market where exploits and vulnerabilities are bought and sold, according to Damballa.

“While there is no insight into a specific buyer, we can assume if an exploit for iOS 9 is found, Zerodium will sell it for way more than (US)$1 million,” wrote Loucif Kharouni, senior threat researcher at Damballa, in a company blog post.

“Finding an iOS 9 security breach would have severe repercussions for millions of iPhone users, which have traditionally been given a higher grade for security than Android because of their ‘walled garden’ approach to Apps,” he noted.

Will Bounty Be Paid?

Will someone really get a million bucks for an iOS 9 exploit?

“When someone gets in touch with them, we’ll see if the bounty is real or not,” Kharouni said.

However, any bounty award will be difficult to confirm, he pointed out. “Anyone who tried to collect the bounty will want to remain anonymous, whether he gets paid or not.”

It’s a difficult path for any bounty hunter wishing to bag the cool million, Kharouni continued. “It’s a challenge to find an exploit for iOS, because it’s way more secure than Android.”

Zerodium has set high standards for the kinds of exploits that would qualify for the iOS 9 bounty.

A RAT, or remote access Trojan, gives an intruder remote control over a device.

A number of high-tech companies offer bounties to help plug holes in their software programs. They may pay $10,000 to $15,000 for a significant exploit. Those amounts face tough competition from the underground market, however.

“I’ve seen some hackers claiming to have a $400,000 budget for bug bounties and willing to pay two to three times what’s offered by a company bounty program,” said Kharouni.

First, it discovered that hundreds of apps infected with malware had been uploaded to its App Store.

Then, as it scrambled to clean up bugs in the initial release of iOS 9, a lockscreen vulnerability was found in the OS.

The malicious app problem emerged after researchers found that Chinese developers were downloading a counterfeit version of Xcode, a tool Apple distributes to developers working on iOS apps.

Unknown to the developers, the bogus version of the tool infected the apps they were creating with malware called “XcodeGhost.”

The reason the developers were downloading the flawed tool was that it was hosted on servers where it could be downloaded much faster than it could from Apple’s servers located in the United States.

As Apple went about purging the pernicious apps from its ecosystem, it committed itself to making sure the incident was not repeated in the future.

Apple will be setting up servers in China so the company’s development tools can be downloaded faster there, SVP of Worldwide Marketing Phil Schiller reportedly said last week.

Although the snafu tarnished Apple’s sterling security reputation, it could have been much worse, suggested Appthority.

“Given our risk analysis results of infected apps regarding their actual behavior, we feel that it would have been easy to add more harmful behaviors to the code and we might see that in the future, but the author of XCodeGhost chose not to implement them in the versions we analyzed,” wrote Andreas Weinlein, an engineer at Appthority.

“The recent exploit on Apple has shown us that even Apple’s system can be compromised quite easily,” observed Filip Chytry, a security researcher with Avast.

“While this time nothing significant happened, it is a reminder that having everything under an Apple system could potentially make a system vulnerable,” he told TechNewsWorld.

“If hackers are able to exploit one entry point, they are able to attack all of the other iOS devices — and the fact that Apple doesn’t have a big variety of products makes it easier,” Chytry pointed out.

However, Apple’s use of “sandboxing” within iOS offers its users a measure of security from attacks by malicious apps.

“As part of the sandboxing process,” Chytry said, “the system installs each app in its own sandbox directory, which acts as the home for the app and its data. So malware authors cannot easily access sensitive data within other apps.”

Past versions of iOS have been afflicted with lockscreen vulnerabilities, and that was the case with iOS 9, too.

Jose Rodriguez, who discovered a lockscreen bug in iOS 6.1.3 two years ago, exposed the iOS 9 lockscreen flaw. He demonstrated a way to bypass the lockscreen by exploiting iOS 9’s five-attempt lockout policy when Siri is activated from the lockscreen. Once the lockscreen is bypassed, an intruder can access a phone’s photos and contacts.

“Every major upgrade represents the potential to reveal and increase an attack surface on a given device, because software is made by humans and there are market pressures to get the device to market — even if there are some small number of bugs that have yet to be found,” explained Cameron Camp, a senior researcher with Eset.

“No locking technology implementation is perfect,” he told TechNewsWorld, “and with every novel approach, there are likely to be bugs along the way. Hopefully, responsible disclosure and code reviews will serve to minimize the exposure time and rapidly deploy patches to help consumers.”